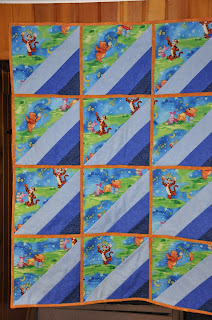 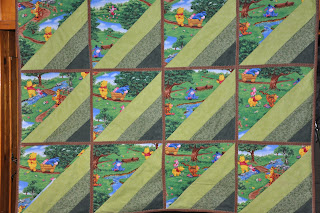 There are five different fabrics for each side. 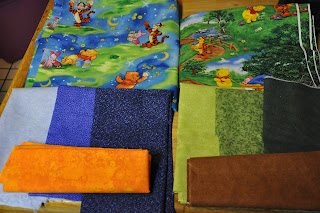 The fabric selection for side one are on the left and side two are on the right. The colors “echo” into darker shades away from the triangle. 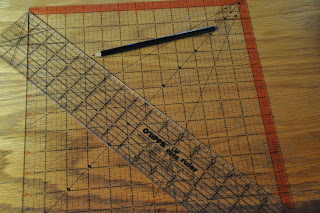 The cutting square has a tiny mark to help center the image in the triangle. 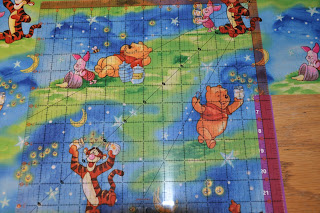 Start by centering the image on that mark and then cut out the square. The square is then cut in half to make the triangle. 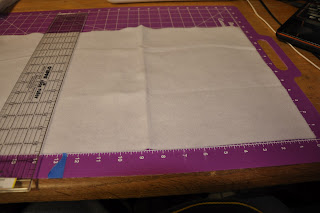 I also cut out the batting squares to sandwich the layers. 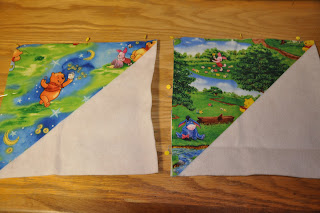 Pin the triangles to each side of the batting on the same corner. 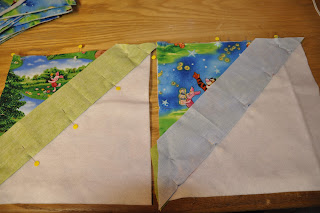 Press open the strips. (My pressing board is old and scorched. Yuck. I need to recover it. I can’t figure out how to get the stains out.) 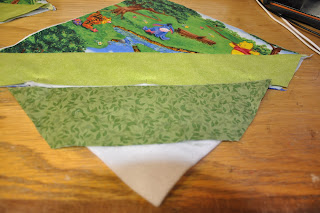 Add the second set of strips to the front and back of the block. I didn’t cut out each strip prior to pinning. I trimmed each strip from the longer section when I was ready to use it so I could better determine the size that I would need. When doing two sides of the block at the same time, a little wiggle room is needed in case something doesn’t come out exactly right. Pin to the block. 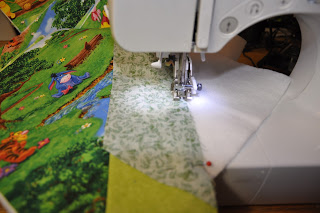 Sew the second set of strips to the block. Press open. Repeat for the third and final strips. Pin, stitch, and press open. 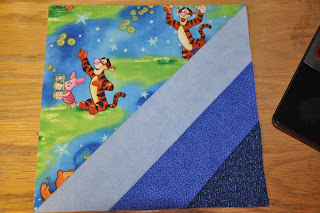 You should now have a finished block, front and back. 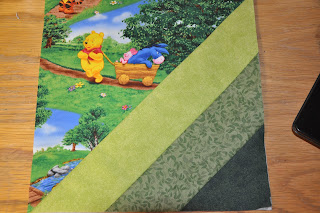 I used twelve blocks to make the baby quilt. In this project, I made 12.5 unfinished blocks, but you can make them any size you wish. You can also use more or less squares depending on how big you want the quilt. If it had been for a pet, the quilt would have used fewer blocks. If this had been for a bed, there would have been more blocks. 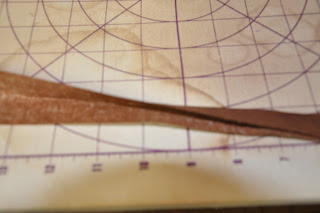 Make sash for hiding the seams of the blocks. The brown sashing is for the green side. The orange sashing is for the blue side. For this project, I make 1.5 inch sashing. Fold in half and press. (I do apologize about the awful pressing board.) 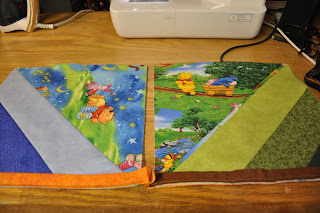 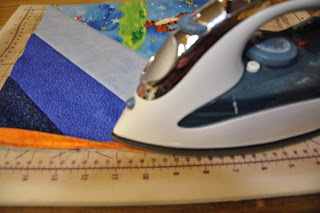 Press open the sashing on each side. 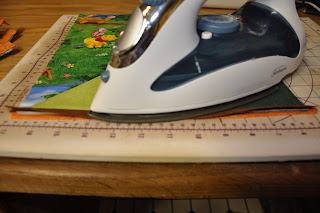 Pin the sashing onto the second block and stitch to secure the blocks together. If done correctly, the folded side should be on the second block. Remember you are doing the front and the back at the same time so one stitch will save some time. 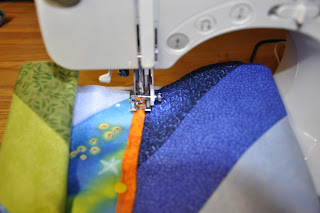 Give yourself a little wiggle room so you don’t miss the sashing on the opposite side. I checked and stitched on the side that seemed to have the narrower sashing. Even though they are technically the same size, it seemed that one side shrank a little more than the other after sewing so that was my “top” when stitching. That way, I would not miss the “bottom” sash. 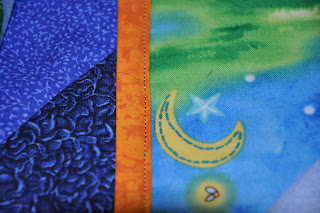 Stitch the line on top of the sashing close to the edge.

Remember, I said the wider side was on the bottom. You can see that the bottom did have a bit more sash on the outside of the stitch. In parts I felt it was too much, so I added a decorative stitch to “hide” the extra material. 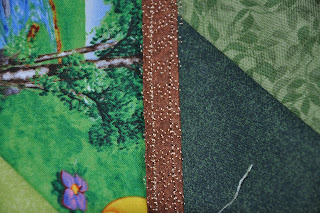 I stitched on both sides of the sash to secure any extra material that was outside the stitch area and to camouflage the securing stitch. I thought of doing the decorative stitch first, but wanted to see how close I could get to the edge. Next time, I’ll start with the decorative stitch and save myself a step. 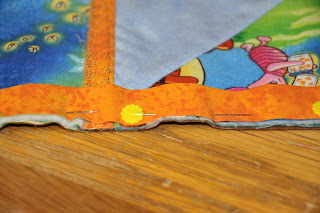 I stitched three block together to form a chain. Then I added sash to those strips so I could attach the chains to the next section. 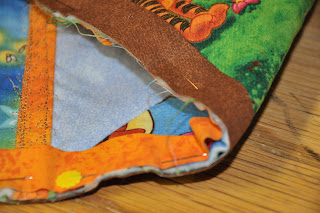 Remember that you are adding sashing to both sides at the same time.
Sew the block chains together. 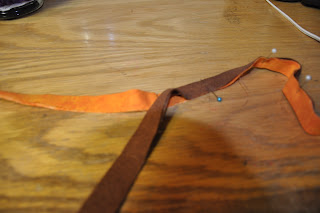 Now, create a reversible binding for the edge of your quilt. I just sewed the bias strips raw edges together. 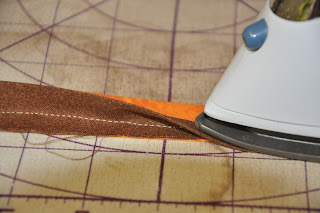 I pressed to the dark side. You should have two folded edges for the sides now. All raw edges will be hidden when attached to the quilt. 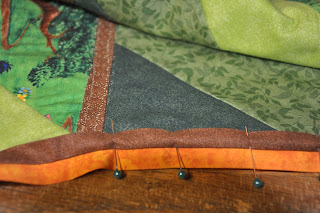 Pin binding to the quilt on the first side. I did not stitch both sides at the same time on the edge. I did one side first and then the other. You could do both sides, but with the edge, I thought it would be easier to do each side seperately. 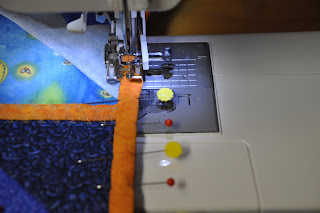 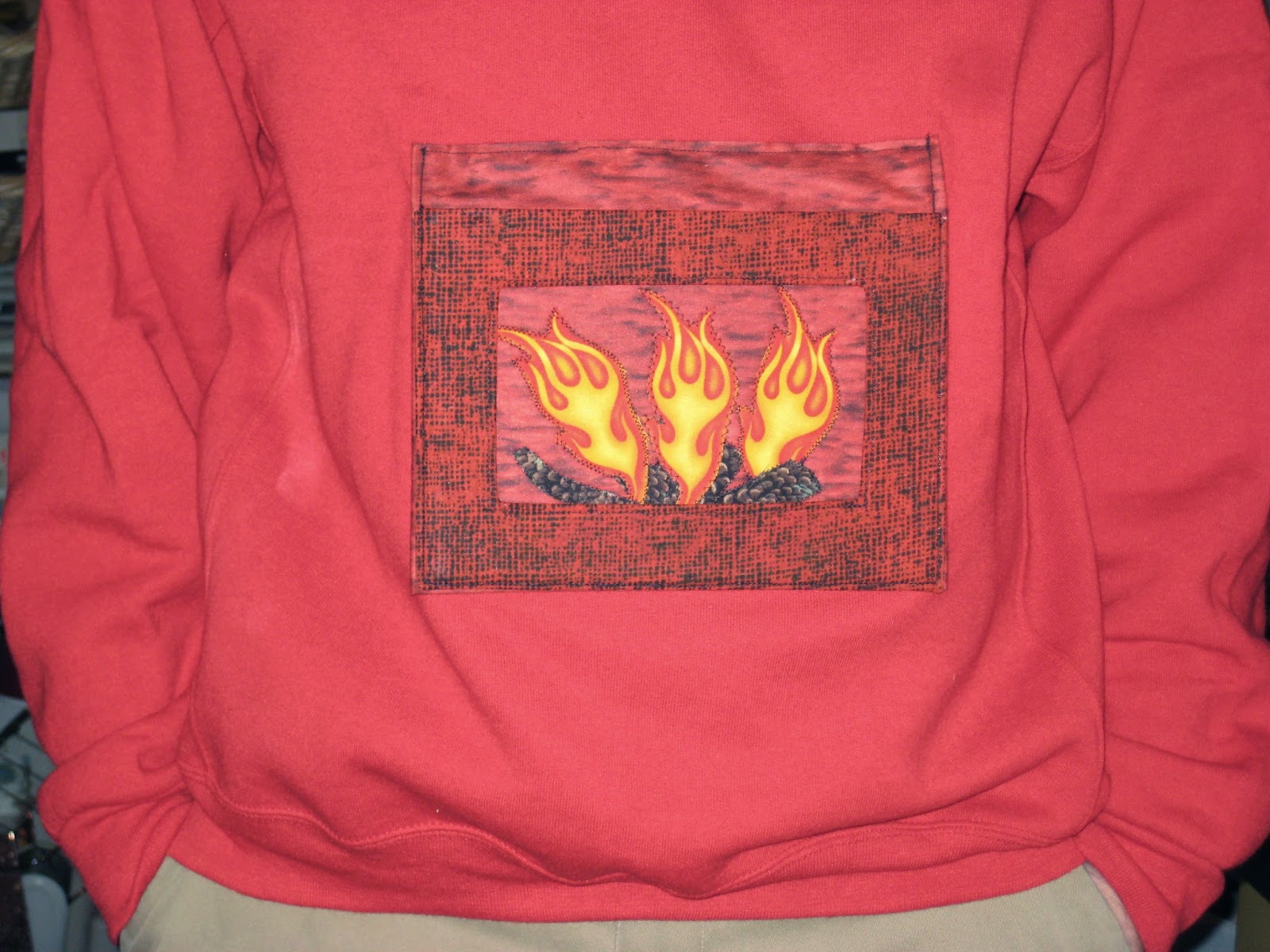